Are our Standards Too High for Apologetic Arugments?

Since I'm a contributor to the Real Atheology Facebook group (please give it a like if you haven't already!) I get to see when some other contributors post on apologetics or apologists Facebook posts.  I am generally loathe to reply using my personal Facebook account, so I try to avoid commenting.

Today however, I keep seeing a post pop into my feed and I decided to put a response on my blog to something that was annoyed me in all the wrong ways.

The post comes from the Capturing Christianity account, which I should say is run by quite a nice apologist named Cameron, who seems very sensible even if I think he's dead wrong on a number of topics. 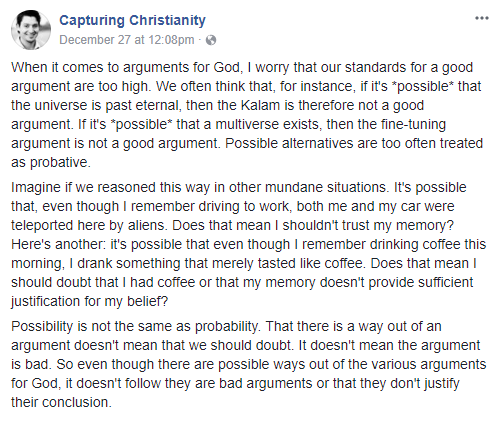 Imagine if we reasoned this way in other mundane situations. It's possible that, even though I remember driving to work, both me and my car were teleported here by aliens. Does that mean I shouldn't trust my memory? Here's another: it's possible that even though I remember drinking coffee this morning, I drank something that merely tasted like coffee. Does that mean I should doubt that I had coffee or that my memory doesn't provide sufficient justification for my belief?

Possibility is not the same as probability. That there is a way out of an argument doesn't mean that we should doubt. It doesn't mean the argument is bad. So even though there are possible ways out of the various arguments for God, it doesn't follow they are bad arguments or that they don't justify their conclusion.

Like all good apologetics, some of what Cameron says here is quite sensible: Even if it's possible that doesn't mean we have enough justification to think it's probable or likely.

However, this doesn't support his idea that just because there are some answers to the Kalam or Fine Tuning arguments that rely on "it's possible that X premise is false" that doesn't mean that there are not better, stronger objections - or that the appeals to possibility in that context is analogous to believing far reaching possibilities in mundane situations.

That said however, this isn't the only objection to the Kalam, which entails numerous problems: Whether the universe has a beginning or not is completely unclear given what we know from modern science.  The most honest answer we have from the standard model is that we don't know. We get to the first Planck second and then our best theories break down and we don't know what happened before that.

We have different theorems that given their assumptions tell us the universe is either eternal or time isn't fundamental (the Quantum Eternity Theorem) or that the universe had to have a beginning (the Bourde, Guth, Vilenken theorem).  The problem with theorems however is that they're only as good as their assumptions.  The QET starts by assuming the Schrodinger equation, which may not be something that's thought of as fundamental in terms of physics. The BGV theorem assumes that the universe has an positive expansion rate (ie. it's expanded on the whole more than it has stayed static or contracted).

The thing is that we don't have nearly enough information or evidence to say that those assumptions are definitely true for either theorem.  Similarly, we have well defined eternal universe models, like the one developed by Anthony Aguirre and Stephen Gratton. There are other models out there which give us eternal universes that give us reason to doubt the Kalam.

This is not at all analogous to believing that aliens have transported me home from a friends house just because it's possible aliens transported me home and gave me fake memories of driving there.   Here we aren't dealing with mundane experiences we are familiar with but rather with dubious metaphysical premises and scientific theories to which we don't have a complete description of yet in contemporary cosmology.

We do not yet have a full description of the laws of physics, in which case we have no way of knowing if there are one of two outcomes: It could be that all the constants referred to in the FTA actually are necessary - ie. they must have the values they possess because there is a grand unified Theory of Everything (ToE) which explains why those constants have the values they do.  We have some experience with this, where some constants that we just assumed were brute end up having an explanation once we got a better understanding of the laws of nature.

Conversely, some scientists think that there isn't a ToE that we will find and that these constants having the values they do, on atheism, are just brute facts - in this scenario the FTA finds its purchase. In this case, an appeal to the multiverse as a possibility can explain why we live in a universe with those constants is legitimate - but we don't need to believe in a multiverse to object to the fine tuning argument.

I should also point out that we don't even need to appeal to this objection specifically to reject the FTA.  There are other points as well:

"Life" isn't well defined, so we have no idea what other kinds of life could arise given other values of the constants we find in physics.

If we look at the universe as a whole we wouldn't assume that it was finely tuned for life, given that the overwhelming majority of it is exceptionally hostile to life. It's just incidental that life...uhh..found a way to exist given the universe we were in.

While Cameron is correct to say that just because something is a logically possible answer to an argument, that doesn't give us justification for believing that possibility.  A good example of this is the Problem of Evil - just because there is a logically possible way out of the problem doesn't give any justification to think such a solution is remotely likely.

What Cameron gets wrong is giving the idea that the only kinds of objections atheists can sustain in the face of arguments like the Kalam or the FTA are appeals to simple possibilities of one of the premises being false.  We have numerous objections that can not be answered by apologists, and we are dealing with non-mundane areas of very unclear topics like fundamental metaphysical premises and unsettled theoretical physics where there is little to no empirical evidence to back up many of the scenarios that we are lead into discussing when it comes to these arguments.

As such, atheists have very good reasons for thinking that apologetic arguments are weak.  In fact I've just laid out exactly why this is the case for the two examples Cameron pointed out.
Posted by A Counter Apologist at 1:59 PM