Can testimony be the basis for a ‘properly basic belief?’

Christian apologist and theologian Randal Rauser has an idea regarding warranted Christian belief that I find particularly interesting, but ultimately wrong.  Randal’s idea is to take the Reformed Epistemology of Alvin Plantinga a little bit further, he wants to use testimony as a foundation for a properly basic belief in something like Christian theism.
This is something he has written on in his book with Justin Schieber “An Atheist and a Christian Walk into a Bar” and a bit about on his blog.
I should point out that Randal prefers using testimony as a basis for properly basic belief in Christianity compared to the traditional appeals to a Sensus Divinitatus, because he considers appealing to a SD to place the theist at a rhetorical disadvantage.
I think Randal’s intuition about being at a rhetorical disadvantage with the Sensus Divinitatus is correct. A mysterious Sensus Divinitatus providing justification for Christian belief in a pre-evidential way is going to sound outlandish to non-believers, and likely would come as a shock to many lay believers in the pews. It’s akin to saying that one’s “Jesus senses are tingling” 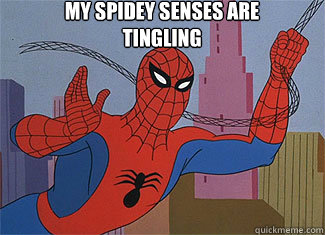 In short, I don’t think that this kind of appeal to testimony as a foundation for a properly basic belief in god is going to work.  I think if he is going to go this kind of Reformed Epistemology route, he’s going to have to appeal to a Sensus Divinitatus, ala Alvin Plantinga. 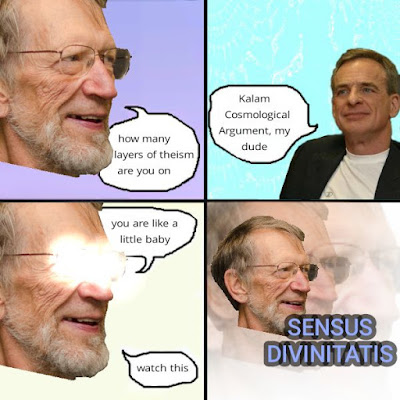 What is a Sensus Divinitatus?  Well it’s akin to saying that we have a 6th sense of sort, the kind that lets us detect that “god exists” or “god is speaking to me” when reading a specific religious text. This allows the believer to form a “properly basic belief” about the existence of god and the truth of their specific religion that is akin to believing that the external world exists. Once they have a properly basic belief of this sort, only the strongest arguments, perhaps even having to show the logical impossibility of the properly basic belief is strong enough to be able to make them give up their belief.  So long as they can have some kind of answer to atheistic arguments, they can retain their properly basic belief.
So Randal thinks testimony from a trusted source can be used to form a properly basic belief about the existence of god or the truth of a given religion.  So if a parent tells their child that god exists and Christianity is true, then the child can take that as a properly basic belief – no sensus divinitatus necessary.
I do think there are problems with this view, and it relates to the nature of testimonial evidence. Consider this blog post where Randal goes into details about when faith in testimony can trump “common sense”.   Here Randal does an absolutely wonderful job attacking an atheist meme in a way I hadn’t initially considered by going through examples where testimonial evidence from an expert in a field would override our common sense intuitions.
I actually think he’s successful in attacking the meme, but his insights on the nature of faith in testimony undercut his general appeal to testimony as a foundation for Christian theism.
Sure, I can see the idea that as a young child, you can rationally base your religious beliefs on the testimony of your parents and/or peers.  The problem however comes when you’re forced to encounter testimony from others which contradicts the original testimony you’ve received – at which point one is forced to choose which testimony to believe.
It’s at that point that evidential concerns rise up for theistic belief which is what the whole “properly basic” method of justification was meant to avoid.  What’s worse is that in all the examples Randal gives of trusting testimony over our basic intuitions it involves someone with relevant expertise giving information a laymen wouldn’t necessary know about.  What if in addition to the scientist or expert or kindergarten teacher example he gives we have someone else who insists the opposite of their testimony – who is to be believed?
In each case Randal gives, the testimonial evidence can be backed up by objectively available empirical evidence that can demonstrate the truth of the testimony.  The fact of the matter is that metaphysical questions like the existence of god is not at all like that.
This runs into some serious problems for Randal’s account that I want to go into detail on.
Properly Basic Atheism?
I have two daughters, and I have already told one of them that god does not exist (my second daughter is only a couple of months old).  I am a trusted source of information to her, and so now according to Randal’s view she has a properly basic belief that atheism is true.  This kind of thing is not really possible on Alvin Plantinga’s model with a Sensus Divinitatus, since on atheism there is no special sense to tell us that god doesn’t exist in a basic way.
I have asked Randal about this on Twitter, alluding to how hard it is to defeat a properly basic belief, to which he provided an interesting reply:

Nope. E.g. If your oldest heard contrary testimony from a more trusted authority or had an experience of God, etc. that could be a defeater.
— Randal Rauser (@RandalRauser) October 25, 2017

Here we get the idea that testimony from a more trusted authority could override the testimony I provided to my daughter that god doesn’t exist, but this seems highly problematic when it comes to metaphysical issues.
First off, what does it mean to be a “more trusted authority” in the context of whether or not god exists? Surely if I continue my trajectory of being a good parent who cares deeply about the wellbeing of my child and I make every effort to ensure that wellbeing, who is going to be more trustworthy than myself?  Compared to most laypeople my amateur status as a philosopher of religion is going to far outstrip most others in terms of understanding the arguments and evidence relating to the existence of god.  So my daughter will have to encounter some philosophers to find someone with more knowledge than I have on the topic, and it’s hard to say they’re more “trustworthy” than her own father, but perhaps they’re more trustworthy on the topic of god’s existence.
But then this is really just an appeal to authority, and those are invalid when a significant number of relevant experts in a field have disagreement on a given issue. Even among philosophers there is not universal agreement that god exists, it’s sharply divided.  So how then is one to find more trustworthy source of testimony about god’s existence?
This is a problem for any contentious metaphysical view. Are the children of David Lewis (assuming he had any) justified in having a properly basic belief about the truth of his views of modality and the ontology possible worlds because “daddy’s an expert and he told me it’s true?”   It seems absurd to say so.
Perhaps children may start that way, but as they get older and on investigation into the nature of the topic itself realize that testimonial evidence isn’t the kind of thing that can serve as a basis for that kind of issue.
Randal’s other method is for my daughter to have an experience of god directly, but then testimony isn’t serving as the basis for her belief, but rather we’re back to the Sensus Divinitatus that Randal was looking to avoid having to use anyway.   There are problems here in terms of how my daughter would know she’s truly experiencing god, and how that squares away vs. contradictory experiences she may have later, or with other people’s experiences – but these are general problems with the Sensus Divinitatus, not Randal’s use of testimony to support properly basic beliefs.
The overall issue is that while testimony can rationally support a number of beliefs, it seems that to have it as a basis for supporting properly basic beliefs can only work in limited cases.  Perhaps in cases where children don’t yet have enough knowledge about the topic or the world to know better.  This seems to be especially problematic when applied to hard metaphysical issues like belief in god, where it is impossible to judge whether or not someone is qualified to offer an authoritative statement on the matter vs. other issues pertaining to topics where evidence is relevant.
However in those cases, we decide on who is a trustworthy source of information based on evidence we have about them and their fields in general – which means we’re playing the evidentialist game which is what the whole “properly basic belief” method of justifying theism is meant to avoid in the first place.
My takeaway from this is that if a theist wants to argue that their religious beliefs are properly basic, they’re going to be stuck with making an appeal to a Sensus Divinitatus and so take on all of the disadvantages that comes with it.  I still don’t think that approach necessarily works very well for the theist, but that’s an entirely separate discussion from what I’ve argued here.
Posted by A Counter Apologist at 8:38 AM