1.       If god does not exist, objective moral values and duties do not exist.


This objection is going to cover problems with the kind of objectivity theistic ethics provides as it relates to moral values.  I intend to show that theistic ethics isn’t quite as objective as apologists claim it to be, and once they try to fix the objectivity problem I’m going to point out, they lay the groundwork that can allow for a similarly objective moral value system that is compatible with atheism.
In order for the moral argument to work, an apologist must assume a theory of ethics known as Modified Divine Command Theory. In philosophy, this is what is called a meta-ethical theory. That’s a theory that attempts to explain what makes something morally valuable, and what constitutes our moral obligations.

Modified Divine Command theory says that objective moral values are equivalent to “god’s nature”, and that objective moral duties, that is what we “ought to do” morally speaking, are made up of god’s divine commands to us.
But what do apologists mean when they say something is “objectively good”?  According to famous Christian apologist William Lane Craig, something is objective only if it is mind-independent.
So on their view something like love is good only if it is a property of god’s nature.
And it’s objectively good, because it’s mind-independent.
Hey wait a second, don’t Christians conceive of god as a disembodied mind?
“Therefore the cause of the universe is an unembodied mind. Thus again we are brought, not merely to a transcendent cause of the universe, but to its Personal Creator.”
-William Lane Craig, Reasonable Faith Website

Audio Link (12:41 Timestamp)
How can Craig say that god’s nature is somehow “mind independent” when he holds that god is an unembodied mind. How can the nature of a mind be “mind independent”? After all, being a mind is a necessary condition in order for something to be “loving” or “truthful” or whatever other properties Craig wants to stuff in god’s nature.
While this seems like a contradiction in the theistic worldview, I can think of one way to harmonize this problem.  One could say that if a god exists as apologists conceive of him, then it would be a “mind independent fact” that his nature as loving.
This kind of objectivity is purely descriptive in its nature, and if apologists want to use that kind of objectivity to serve as their foundation for their meta-ethical theory then it’s actually pretty easy for an atheist to achieve the same thing.
One possible method of objectivity in this way would be universal human desires. After all, even on atheism humans have a nature as dictated to us by the brute facts of our biology. All of these facts would be “mind independent” in the same way apologists say facts about god’s nature would be.  This view is defended by philosopher Larry Arnhart in his book: Darwinian Natural Right: The Biological Ethics of Human Nature.
There are other possible formulations of atheist compatible meta-ethics that can be given here.  Another explanatory ultimate for an atheist meta-ethic could say something is good if it provides for the wellbeing or flourishing of conscious creatures: after all there are some mind independent facts about that in at least some cases. There are lots of ways you can take this, but that’s beyond the scope of this video. I do encourage viewers to investigate the wealth of meta-ethical views that are out there, where the vast majority of them are completely compatible with atheism.
There is one other objection that I want to cover here, as it relates to the objective nature of moral duties.  Mind independence isn’t the only kind of objectivity that seems to be relevant when discussing things like moral duties, or what we ought to do, morally speaking in any given situation.
The basis apologists use to justify premise two of the moral argument, the idea that objective moral values and duties exist at all, is to appeal to our deeply held moral intuitions. Deep down, we feel as if moral judgements are objective.
But when it comes to moral duties, our moral intuitions tell us that for a duty to be objective, it should apply to all beings that are capable of acting morally.  The problem for Modified Divine Command Theory is that it doesn’t provide this kind of objectivity at all. In fact it’s tailor made so that god has a get out of jail free card for not fulfilling moral obligations we’d hold even other lowly humans to.
This is the impetus behind atheist critiques of theism like this one by host of The Atheist Experience TV show, Tracie Harris: 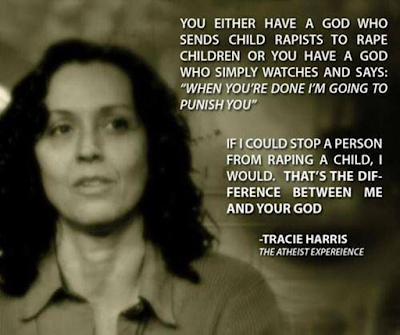 Modified Divine Command Theory exempts god from having any moral duties at all, because he does not issue commands to himself. You can see Christians like William Lane Craig bring this point up when they engage in genocide apologetics to justify god commanding the genocides in 1 Samuel 15:1-3:


“According to the version of divine command ethics which I’ve defended, our moral duties are constituted by the commands of a holy and loving God.  Since God doesn’t issue commands to Himself, He has no moral duties to fulfill.  He is certainly not subject to the same moral obligations and prohibitions that we are.  For example, I have no right to take an innocent life.  For me to do so would be murder.  But God has no such prohibition.  He can give and take life as He chooses.”


-William Lane Craig, Reasonable Faith Website
Compare this with other meta-ethical theories, nearly all of them compatible with atheism, where we do get an objective system of moral duties that would apply equally to all beings capable of acting morally, even god, if one existed.
The conclusion to take away from this video is that theistic meta ethics doesn’t necessarily provide the kind of objectivity that apologists say it does. Furthermore, once those theories are examined to see how they could be seen to provide that kind of objectivity, it’s in a way that’s easily achievable by atheist compatible meta ethical theories.

Posted by A Counter Apologist at 6:44 PM