Note: What follows below is a transcript of this video


I wanted to cover some of the best objections to the moral argument for gods existence in their own smaller, easier to digest videos.
To sum things up quickly, here’s the standard moral argument for god’s existence:
1.       If god does not exist, objective moral values and duties do not exist.
2.       Objective moral values & duties exist
3.       Therefore god exists


This video is going to cover a response to an objection apologists will always bring up when debating the moral argument with atheists.
The moral argument is about a philosophical topic known as moral ontology. If you’re like the vast majority of people, you probably have no idea what that means.
Moral ontology is about “what kind of thing moral values are”.  Going over the three options available will probably help explain what I’m getting at.
1.     Moral Naturalism – the idea that moral facts reduce down to facts about the natural world.  This is compatible with atheism, and is generally what most atheists argue for.

2.     Moral Non-Naturalism – the idea that moral facts are facts in a-causal reality. That is objects that just exist as objects in some platonic realm where they cannot causally interact with the natural world.  Effectively I’m talking about Platonism here. This is also compatible with atheism, and a few philosophers defend this view today.

3.     Moral Supernaturalism – the idea that moral facts reduce down to facts about supernatural beings, like a god.  This is not compatible with atheism and is what the moral argument tries to establish.
In order for the moral argument to work, an apologist must assume a theory of ethics known as Modified Divine Command Theory. In philosophy, this is what is called a meta-ethical theory. That’s a theory that attempts to explain what makes something morally valuable, and what constitutes our moral obligations.
Modified Divine Command theory says that objective moral values are equivalent to “gods nature”, and that objective moral duties, that is what we “ought to do” morally speaking, are made up of god’s divine commands to us.
Typically atheists will argue for some kind of moral naturalism, the idea that moral values and duties reduce down to facts about the natural world, generally about conscious creatures.
Take for example Humanism, which says that human beings are objectively valuable and basis its ethical imperatives around that explanatory ultimate.
Apologists say that atheists don’t have any justification for assuming that human beings, or even conscious creatures are morally valuable, or are objectively valuable.
We will hear lines like “on atheism humans are evolved via an accidental, impersonal process" and so we are no more valuable than any other material object in the universe.
The problem with this objection is that atheists can point out that human beings, or more generally, conscious creatures, are more valuable than any other material object – because we have relevant differences between us and other material objects that give us our value.
One track we can take to argue for this is to point out that even on atheism; consciousness is a necessary condition of being able to value anything at all. As such this makes conscious creatures inherently valuable compared to non-conscious material objects – because they have the ability to value anything at all.
Another track we can take to argue that human beings are morally valuable is that we have a number of special abilities that give us value: the ability to love, to form relationships, to be happy or sad.  When we reflect on these qualities, our moral intuitions tell us that there is something special about those qualities, and so those abilities are what give us value.
In his response to my videos on the moral argument, apologist William Lane Craig says that if atheism is true then things like “love” are only a chemical process, and as such he can’t see how moral values attach to that.
This seems to say that love or any other mental process “doesn’t matter” if it boils down to purely physical processes, which reminds me of this great comic from Saturday Morning Breakfast Cereal: 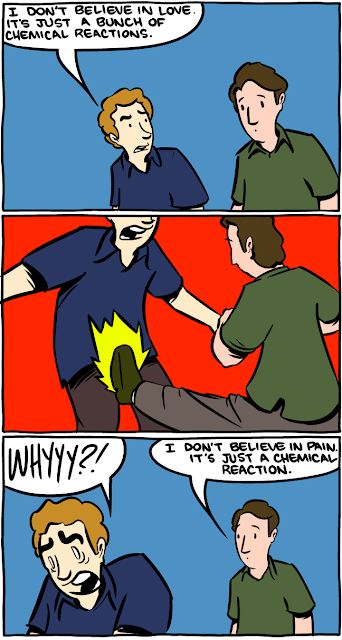 Saturday Morning Breakfast Cereal, used with permission, Thanks Zach!
The point is that even if love was just the result of chemical processes in our brains has no bearing on whether or not it matters. It certainly matters to the kinds of beings that are able to value anything at all – conscious creatures.
What I want to point out here is how empty this kind of objection is.  After all there’s no real explanation as to how values “attach” to god’s nature either, apologists just state god’s nature as an explanatory ultimate for moral values and that’s it.
An explanatory ultimate is the stopping point for our explanations about something.
Apologists will say that claiming the ability to love, or form relationships, or to be happy or sad is to be premature in cutting off our explanation as to what gives us value.
Atheists in turn say that apologists simply add an unnecessary step, namely god, that does no explanatory work. For instance, there’s a reason their meta-ethical theory is called “Modified” Divine Command Theory, because one of the other basis’s for values that at least some Christian theologians held to in the past was regular old “Divine Command Theory” which said that whatever god commanded was what was good.  The modification was saying that whatever a “loving god commanded” constituted our moral obligations, and that his nature is the basis for moral values.  But what exactly is doing the work in this explanation, god or the addition of the word “love”?
In the end, my point here is that the moral argument fails, specifically because atheists can have our own explanatory ultimate for moral values that is no less arbitrary than what apologists hold to as their explanatory ultimate. For more information on this, please check out my other Moral Argument Short on “Brute Facts”.
Apologists may not like our basis for moral values, or find its stopping point premature, but the inverse of that is true for atheists and their moral theory.  What they can not say is that we do not have an objective basis for moral values and duties.
Posted by A Counter Apologist at 6:44 PM