A Counter-Counter-Reply to Blake Giunta

In my last post, I put up a review of the debate between Matt Dillahunty and Blake Giunta where I largely was responding to the arguments Blake was making.

Blake caught wind of this and in replying to me decided to put up his own response to me on his blog.  This caught me at a decent time and he was very kind in his reply to me, so I decided to answer some of his questions that he posed as well as to respond to some of the things he said. 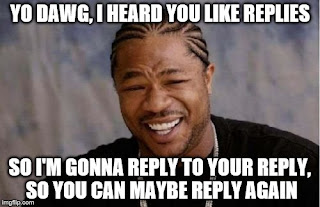 Jump below the fold for my response!

I'm hoping to hold my worst impulses in check and avoid a tit-for-tat style reply. I think we're largely going to end up agreeing a bit now that I've read some of your replies.

I see the distinction you're making with your "modal argument from beginnings" vs. Plantinga's modal ontological argument and it's a bit more nuanced than I noticed before.

It's a very interesting move, to say that there was any "contingent thing" that was "caused" would then allow you to run your argument.  My initial thought once I caught what you were saying was actually: Nice.

I think there's a problem for both the theist and the atheist when it comes to these kinds of cosmological arguments, and it will remain so for yours.  Basically, by simply introducing the idea that there is a contingent thing at all, you try to make the move to theism because typically one would think that given naturalism, everything would follow necessarily from the laws of nature and a starting brute contingent fact.  I think the same kind of problem faces theism, which stems from the kind of thinking from Dan's Cosmological Euthyphro Dilemma, but that will get us into the whole free will discussion, which I don't care to have at the moment. I do agree with your tying my second and third objections in together since once the theist starts pushing back on Dan's CED, it's going to go into the same kind of territory.

As you note, given this argument we're left with "a necessary concrete object exists".  I think that having any kind of mechanism that could cause some non-deterministic event, ie. a contingent thing, would get us through your argument. You want to argue it's a god with a non-deterministic free will, but as an atheist I don't really see a problem with postulating a non-deterministic basic physical "stuff", perhaps like what is described with quantum mechanics, that could give us this answer.

FWIW, I'm sure we're both aware that whether or not QM is deterministic or non-deterministic is a matter of strong controversy, however it's safe to say that the jury is still out on that one.  Basically my point here is that the atheist can grant your argument and you won't really move any closer to theism given the conclusions.

The other option of course is to reject that there really is a first contingent thing and that everything is necessary.  A multiverse like scenario, which is predicted by some of our best theoretical models of the universe, would give us such a case.  In fact I'm fairly sure that at least some forms of Calvinism would hold to that, but I'm not sure.  The point is more that whether or not things are contingent and necessary is going to open up issues both related to physics and philosophy, as well as theology.

I got my distinction of naturalism vs. supernaturalism of being one where the fundamental constituent of reality is either physical or mental from my interactions with another (and also very kind) apologist, Randal Rauser.

I agree that it gets hairy when painting the distinction that way, but this is going to be an inescapable problem due to how hard it is to define naturalism and supernaturalism.  Basically, if we grant that "something is necessary", the difference between the two views will be one where a mind is fundamental (god) or something physical is fundamental.

As far as contingent qualities, basically the way I see it whatever the necessary thing is, it's going to have a bunch of properties that are not logically necessary for it to have and the fact that it has those quantities will simply be brute.   For instance, the fact that if a causally powerful mind exists, the fact that god is loving rather than being indifferent or even malicious is a brute contingent fact.  Similarly, if there's some fundamental quantum "stuff" out there, the fact that its behavior/nature/whatever is described by a specific set of equations that we call the laws of quantum mechanics is itself a brute/contingent fact.

This point is one that I think is important.  The reason I bring it up is that you make the move to go from a concrete necessary object to a causally powerful mind is to say that we only know of minds to have a kind of free will that can do this.  The problem is that for any conception we have of a mind, it is necessarily temporal.

I do see the distinction you're making, but I'm not really sure how its relevant? I do hold that if god is timeless then the creation of a space-time a finite time ago is just as "impossible" or no less of a problem than some quantum 'stuff' giving rise to a space-time a finite time ago.  It's basically a paradox about time having a beginning and I see it as no less problematic for a theist than many apologists say it is for an atheist.  This holds regardless of whether or not simultaneous causation is shown to be coherent.

I think we agree on a good amount here, but I want to list that out.

I agree the moral arena is more likely on theism than naturalism, and so even if theism has to "run the gauntlet" as you say, then yes you'll still have the moral arena as evidence for theism over naturalism due to the initial bump.

Per Paul Draper, I do believe this is counter acted by the fact that anything physical at all exists, which is itself evidence for naturalism over theism.

As far as angels and demons and replacing one kind of body for another, I'm a little confused. It seems that you'd have to grant that heaven is itself some kind of spacio-temporal place in order for this to work.  What is there to say that they are necessarily embodied except for when they appear?  What of demons possessing things in the bible, where do their bodies go if their minds are occupied in say pigs or people?

This does pale in comparison to the main point, that god does not, in fact given your theology can not, significantly have his options to do good increase. Didn't you start by defining god as the greatest possible being?  There is no limit to the amount he could do in terms of goodness in terms of his being embodied vs. not being so.  If not, then as the greatest possible being he would have to start off being embodied, which how that works if he is also to create space and time, I've no idea.

I do think this is a particularly acute problem for you for two significant reasons.  First is that if bodies give god more options to do good, it's only because god created a bunch of beings with needs so that he can fulfill those needs.  This is exactly a case of creating a problem in order to solve it and then demanding praise for doing so.

However more troublingly (and related to your point about god/spirits lacking a bodies in a space-time limiting the moral arena to nothing) is that this causes significant problems for your theology as a Christian.  Frankly I can't believe you're willing to say this.

Don't Christians acknowledge the greatest commandment being to love god and to love others?  How does love necessitate a body, given theism?  It certainly can't, given that god is supposed to be a being of love, and is supposed to be in some kind of intra-trinity style agape love for eternity past.  Similarly if it's just a bunch of mind-spirits interacting in some mind-substrate, then love and communication are just as available.  There's still potential to sin (assuming you think there needs to be the possibility for that), including the sin of disobeying god ala Adam or Lucifer.  But more importantly the capacity to love is not at all diminished, again god as the epitome of a loving being acting as exhibit A.

There isn't too much to say here, other than agreeing that my response does skip all the other steps. My point there is that in doing so, your moral arena argument seems to collapse into a regular design argument.  FWIW, I'm not really interested in hashing out that rather large topic. :)

You bring up a very strong point about supervenience of the mind on physical brains vs. other kinds of matter or systems of matter, given naturalism.  I can actually agree that this is a problem, however I think that it is a significantly bigger problem for theism!  Presumably you are a substance dualist and so your fundamental category of a mind will have the same exact kinds of problems in terms of explaining why minds interact only with brains and not other systems.

This is especially acute in light of the interaction problem for dualism, given that we know that there is nothing about a metaphysical mind, if such a thing could be said to exist, that exerts any energy transfer to effect the very specific parts of the brain relevant to states of a mind.  You can watch this amazingly good talk by Sean Carroll regarding this.  Certainly theism is just as in need of some kind of psycho-physics, as you put it for it's theory of mind to hold up, or at least to come to grips with the fact that all minds we know of have brains and that effects on certain parts of those physical brains have immediate effects on the mind.  This relates back to the topic of embodied minds at all, given that with theism and dualism we have no more reason to expect biological organisms with a brain to have consciousness "attached" than to say a rock or a plant.

It seems to me that given what we know about brains and minds, the idea that the mind is going to be dependent on very physical brain states in the way that we know they are, is significantly more likely on naturalism than theism. This would counteract the fact that the existence of a mind at all would be more likely on theism vs. naturalism, giving us yet another wash.

Suffice it to say the topic of consciousness is a very contentious one that I don't think we're going to solve here.  My point in the comment I made was that the atheist has a decent amount of options open in terms of philosophy of mind, and that while theism purports to have an answer, it runs into all the same kinds of difficulty once it turns to deal with the interaction problem.  This is why I don't think the arguments from consciousness weigh very heavily for theism in general.

This certainly has been a nice exchange and I enjoyed reading your reply.  Hopefully I didn't get too tit-for-tat and my positions are a bit more clear now.
Posted by A Counter Apologist at 9:37 PM