This weekend Justin Schieber of the Reasonable Doubts podcast is going to be debating Randal Rauser at the University of Alberta. 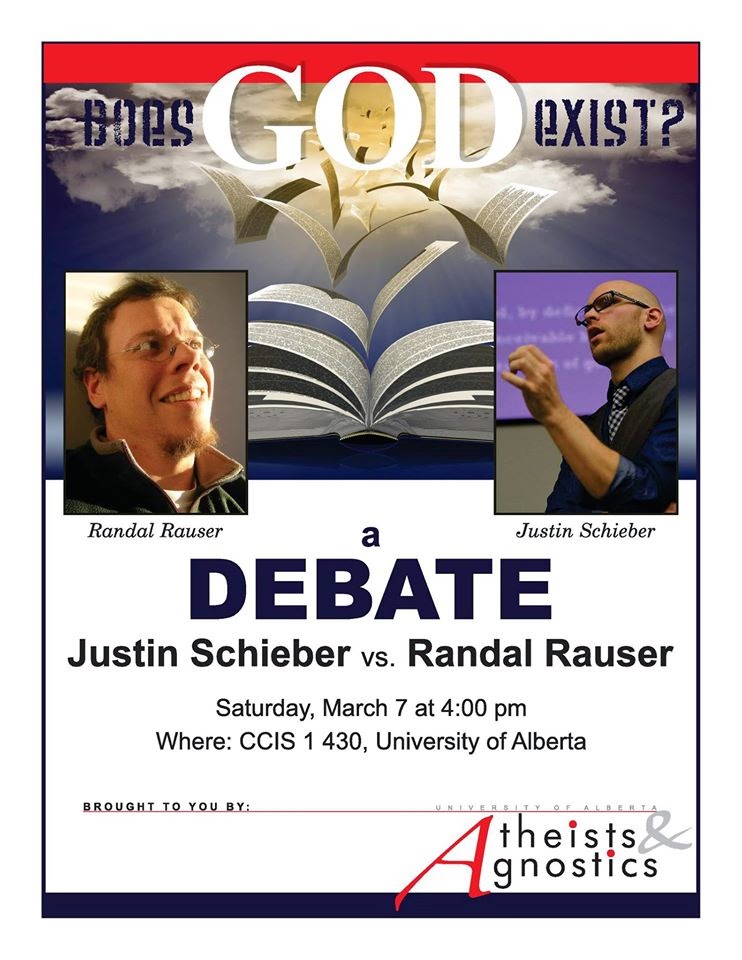 These two fine gentlemen will be following up their debate the next day with a dialog on Belief and Doubt in the 21st Century.

Fortunately for those of us unable to travel that far, plans are to have at least audio, if not video of the debate and discussion available for public consumption online.  Hopefully it won't be long after the debate before it's available.

Despite the fact that I'm unabashedly cheering for Justin to "win the debate", I must admit to being a fan of both these guys (although I'm not nearly as big a fan of Justin as some other online atheists are).  I've had public conversations with Randal in the past, and he has been very gracious to me privately in an extended email exchange that I very much appreciate.

It's not only that Randal is a good conversation partner (he is), it's that he's someone you can learn from.  Randal has a strong understanding of topics related to the "grande conversation" as he puts it on the topic of god's existence, and he is gracious enough to share his knowledge.  I'm not ashamed to say I've learned much from the man and the resources he makes freely available (I may have even paid money for a book or two of his).

Honestly I think we should be grateful any time trained and credentialed academics makes their work freely accessible to the public rather than only publishing in academic journals.  So Randal has my public appreciation for everything he does, even if I disagree with him.

Of course in a post titled about Justin Schieber, I've said an awful lot about his opponent.

Justin is someone I've had the absolute privilege to converse publicly with multiple times in the past.  He's also very accessible via Twitter where I've learned quite a bit from a man who is a bit younger than I am.  I've mentioned before about how the Reasonable Doubts podcast was like a lifeline for me after I deconverted and had to rebuild my worldview from the ground up.  I've actually changed my positions on a few philosophical topics related to atheism because of my interactions with him specifically.

Justin has been a tireless advocate for naturalism, engaging in a slew of debates on physical and online stages, with almost all of them being made available for consumption freely online. The man has experience and has pulled himself up by raw talent to the point of debating a credentialed philosopher and theologian on the existence of god.

I just wanted to put this post out there to express how much I appreciate both these gentlemen, but also to cheer for Justin as he travels north to defend naturalism.

Go get him Justin!
Posted by A Counter Apologist at 11:12 AM