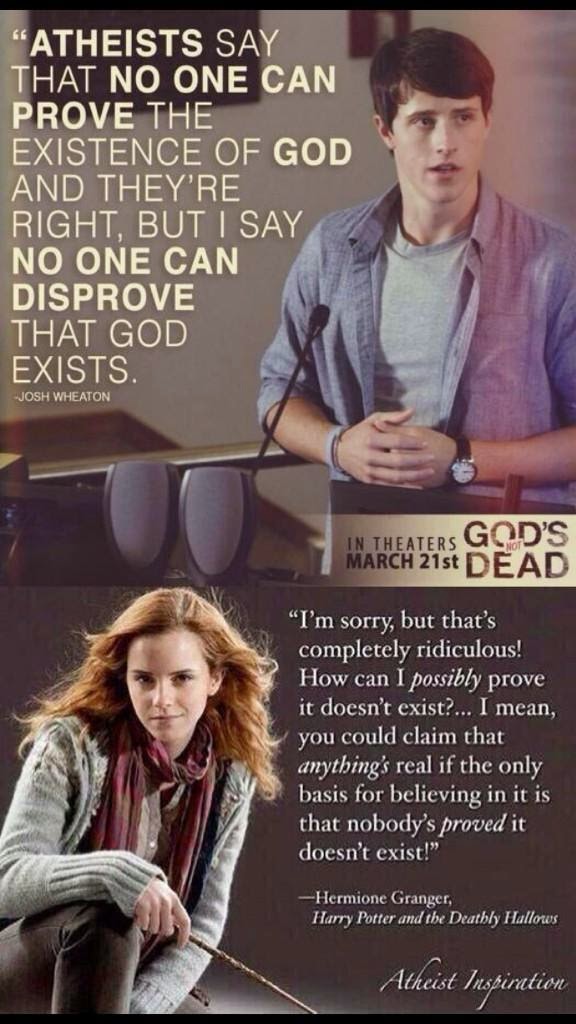 This was in a tweet which was a response to this article by internet Christian apologist WinteryKnight, who is largely citing William Lane Craig.

This is a topic that comes up every so often in atheism, about whether or not we can “prove” god does not exist.

I’ve personally gone back and forth on my views on this question, and I currently find myself putting a foot in both camps.  Lately, it’s become a position among a good number of people I greatly respect and converse with to say that “of course we can prove god does not exist”, which is usually followed with a sensible amount of words that go on to qualify that with something to the effect of “for any reasonable definition of prove”.  This typically involves pointing out that we don’t need something incoherent like “absolute certainty” in order to say “we know there is no god”.

In many respects, I find this kind of argument by my fellow atheists compelling.  On the other hand, I feel this kind of discussion is misused by many apologists, and it glosses over the very real problem underlying the argument behind the idea that we can’t prove a universal negative like “god does not exist”.

Let me first state that the very simply “you can’t prove a universal negative” is strictly false.  Universal statements like this are very hard to get correct, which is a precursor into this sort of problem.  Let's look at exactly why this is the case, per the article.


Is Limited Scope the key?

The first area that WinteryKnight/Craig point to is the idea of limited sample sizes or domains. The example here is that we can say “there are no Muslim US Senators” or “no microbes on earth have brains”.  Again I find this to be extremely disingenuous since even the article admits that in the case of god, such a being is defined in terms of the broadest kind of scope or sample size.  The god being discussed is described as the fundamental un-caused-cause of all of reality, the ground of all “Being with a capital B”, existing outside of space and time.

The article anticipates this almost immediately and points out that god may not fit into this paradigm, and then says we don’t need an exhaustive survey into all of existence to prove universal negatives.  If that’s the case, then this just proves the simple formulation of “you can’t prove a universal negative” is false, but that does nothing to the stronger form of the argument that “we can’t disprove a universal negative for poorly-defined entities”.

And that’s really what I think happens in these sorts of debates.  The term “god” or god’s supposed attributes simply get defined in such a way that it can’t be proven or disproven.

The next example WinteryKnight/Craig rightly bring up is that we can prove a universal negative in cases where we can show a logical contradiction is entailed.  This is usually followed up by alleging that many atheists have tried to do this with the god of classical theism (ie. omnipotent, omniscient, and omni-benevolent), and that they’ve failed.

There are two problems here when it comes to applying this to debates about the existence of god.

The first problem is with the example used in the article to point at analytic truths, or things that are true by definition such as “there is no water that is composed of CO2” or “there are no unmarried bachelors”.

This is a red herring when debating the existence of god.

In any case where the atheist can attempt to show such a contradiction, they will immediately (and rightly!) be accused by the apologist of begging the question.  You see this often when the definition of “naturalism” is brought up, and many atheists try to define god out of existence. Atheists will similarly object to theists using forms of the ontological argument which simply define god as a necessary being, which by definition entails that the god must exist. Begging the question is bad, no matter which side does it.

That’s why this kind of example is a red herring in the god debate, because unlike “water” or “bachelors” we won’t ever really come to an agreement on what “god” means, let alone what god’s attributes mean, or such terms like “moral goodness”.

A great example of this in action among Christians is a tactic we see among some evangelicals: “I hate religion too! Christianity isn’t a religion, it’s a relationship!”

The problem with saying atheists can prove god does not exist by showing a god or his attributes entail a logical contradiction is that when we’re talking about arguing about the god of classical theism such a god and his attributes are notoriously ill-defined.

A great example of this would be the entire field of what’s known as “Christology” which is a theological field that attempts to explain away the “apparent” contradiction of Jesus being “fully man and fully god”.   The same thing happens when it comes to talking about the idea of “The Holy Trinity” and how there is one god in three persons.

What happens here is that a truckload of metaphysical assumptions about what it means to constitute a “being” are simply brought in.   So long as those assumptions themselves don’t entail contradictions, and it’s not hard to come up with ones that don’t, there’s not much to be done other to call such assumptions implausible.

In every case, there’s hardly a reason for non-theists to adopt said assumptions, but in these cases the apologist is just playing defense. All they need to say is that so long as it’s possible that those assumptions are true then they can avoid being proven wrong by showing logical contradiction.
So if we try to use “logical contradiction” as a basis for “proving god does not exist” we get met with shifting goal posts.

The last part mentioned was an attempt to make it seem as if apologists are being specific enough in terms of the god they want atheists to disprove: they mean specifically the god of classical theism, or the god of Christianity.

This kind of statement doesn’t really do anything to solve the problems described above, since what that kind of god is or what his attributes entail are very problematic to define.  This kind of move just pushes the problem back one step.

Straw Men in the Article

Here WinteryKnight takes over from simply quoting William Lane Craig and makes a few egregious statements that I think prove my case.   In an attempt to show how atheists could prove god doesn’t exist he says:
“Look where you expect the thing to be evident, and show that the evidence is not there. For example, show evidence that the universe is eternal. You can’t have a Creator if you can show evidence that the universe is eternal.”

First of all, we can show scientific evidence that the universe is eternal.  Sean Carroll does it in his debate with William Lane Craig when he brings up the Quantum Eternity Theorem.  Other scientists do so when they get very specific what they mean about “time” as discussed in cosmology, specifically as a part of a 4-Dimensional “space-time”, which contradicts the metaphysical view of time arguments like the Kalam need in order to argue for the existence of a god.

In these cases Craig (and I’m sure WinteryKnight) will point to metaphysical arguments saying that what science says about time isn’t definitive enough for them, and as such it becomes pointless to argue on such matters, or in what direction modern physics is trending with respect to our understanding of time.
Conversely, even if we could somehow force them to accept the deliverances of science and philosophy that shows material reality is eternal, that will do absolutely nothing to dissuade belief in the Christian god. Consider Catholic theologians who cite Aquinas, whose cosmological arguments assume an eternally existing universe, or Craig’s speculations on how if one accepts the B-Theory of time and it’s eternally existing universe one can still consider the universe to be dependent on god for its existence, even as it exists co-eternally with god.

Consider the further evidence WinteryKnight gives us for arguing against Christian theism:

I’m always amused by the claim that if we found the bones of Jesus it would cause people to give up Christianity.  Even if we found a tomb dated to the first century that has a coffin inscription saying “here lies Jesus of Nazareth, crucified by Pontius Pilate” in Aramaic, what stops any Christian from claiming it was a hoax? Entire fictions have been written about the downfall of western civilization upon the “finding” of such evidence, only to have everything restored to order once the finding is revealed as a hoax.

As far as the naturalistic scenario for the origin of life goes, we have experiments like the Miller-Urey experiment, which lets us combine things like water, methane, ammonia, hydrogen, and electricity to form amino acids, a building block of life.

What’s the response to such advances in abiogenesis?  To insist that such experiments have “intelligent designers” in the form of scientists and laboratories. Never mind the point of such experiments are there to show it is possible, given certain conditions “non-living” chemicals can interact with their environment to form arguably “living” basic forms of life.  The point is that it is possible, and that somewhere in the history of the universe, things came together in such a way by natural processes that produced life, which then went through a process of naturalistic evolution.  We clearly don’t exactly know how life on earth started, but we at least show such a process can happen in principle, without appeals to a god.

The idea behind saying “I can’t prove there is no god” is to highlight that atheists don’t have to undertake such a process.  In almost all of these cases, the atheists stating them will not also say that they have no duty to refute religious apologetics.

This is one of the “negative ways” of making a case for atheism, to simply refute all attempted apologetic arguments and then claim that theism is not established.  The goal here is quite simply to create more “not-theists” than it is to create explicit atheists.  There are arguments that the position of “agnosticism” is practically useless, since we don’t have to claim to be “agnostic” about the existence of other supernatural entities, like unicorns, leprechauns, or Flying Spaghetti Monsters.  We simply don’t believe they exist because they are implausible in light of our background experience, and because there is no evidence for their existence.

For my part, I like to think of my goal as creating as many “not-theists” as possible, because I find theists as a group to be problematic in how they influence the rest of society (ie. the Religious Right).

Conversely, I don’t find much wrong with alternative approaches that DO try to argue for explicit atheism by using arguments that render god’s non-existence more probable than his supposed existence. This is your standard stuff like the problem of evil (or gratuitous evil), the problem of multiple exclusive religions, or historical miracle claims from contradictory religions, or issues like divine hiddenness and the argument from the existence of hell.

The problem there is that while these can be persuasive, and in fact useful as a way to cause believers to question their faith, they’re as flawed as the supposed arguments for god’s existence – there’s always a logical out.

This is why I say I’m an atheist primarily because if I start from as neutral a position as I can, I find no good evidence to believe in the existence of such a being.
Posted by A Counter Apologist at 12:16 PM